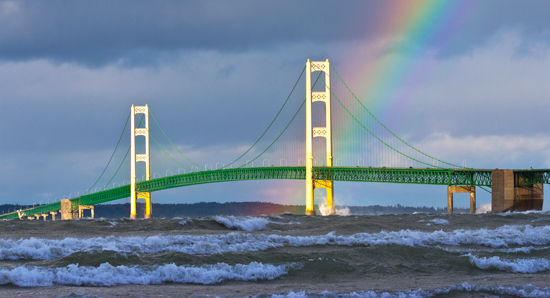 Photo by ToddandBradReed.com
The Mackinac Bridge is the 10th largest suspension bridge (over water) in the world. It connects Michigan's Upper and Lower Peninsula over the Straits of Mackinac, where Lake Michigan and Lake Huron meet. Mackinaw City is located at the southern point of the bridge, and St. Ignace at the northern point. I-75 is the highway that crosses the bridge...which starts from Sault Ste. Marie and ends north of Miami. The total length of the suspension bridge is 8,614 feet, with the total length of the bridge at five miles. Close to 500,000 vehicles cross the Mackinac Bridge during the summer; that number drops to around 169,000 in January. Annual vehicle crossing is approximately 4,000,000.

History of the Mackinac Bridge 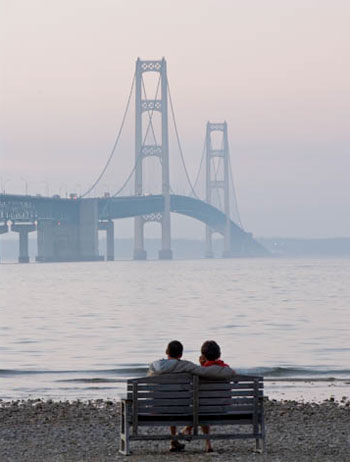 Photo by KenScottPhotography.com
As far back as 1884, discussions were being held regarding the need for a bridge or tunnel between the Upper and Lower peninsulas. After the construction of the Brooklyn Bridge in 1883, interest grew for a suspension bridge of this type to span the Straits of Mackinac. The Board of Directors of the Grand Hotel on Mackinac Island reiterated the great need for a bridge to bring tourists to the island during the summer season. Over the next 50 years, many ideas were presented...from a floating tunnel to a series of bridges and causeways from Cheboygan, around Bois Blanc and Round Islands, to Mackinac Island and finally St. Ignace. Ferry service was started around 1923, but the traffic became so heavy that once again plans for a bridge were resurrected. In 1934, the Mackinac Straits Bridge Authority of Michigan was formed. During the next ten years, grants and loans were applied for, plans were drawn up, and a 4,200 foot causeway from St. Ignace was constructed. Then WWII began and all bridge progress came to a halt until 1947. Finally in 1953, financing through a group of investment companies was the catalyst to finally begin the bridge project. Maintenance of the structure would be paid for from license plate and gasoline taxes. The great engineer Dr. David B. Steinman was hired for the design of the Mackinac Bridge and construction officially began in May of 1954. After three years, the Mackinac Bridge was open to traffic on November 1, 1957. Total cost to build the bridge was $99,800,000. During construction five men lost their lives, and a monument in their honor was erected. In 1997, a bridge painter fell to his death...putting the death toll at six. 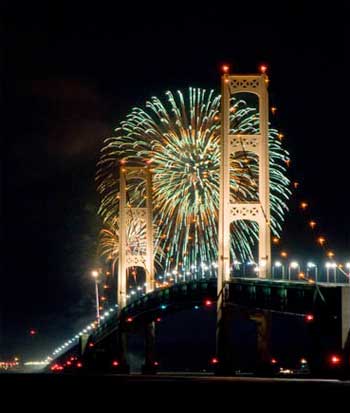 Photo by KenScottPhotography.com
Passenger vehicles pay $2 per axle and motor homes, commercial trucks and others pay $5 per axle. If you need to cross the bridge by foot, bike, or snowmobile, you can take advantage of The Mackinac Bridge Authority's Transport Services. The cost is $3.50 for pedestrians, $5 per bicyclist and $15 for a snowmobile and driver. Maximum speed on the bridge is 45 mph, and no stopping or U-turns are allowed. Trucks with gross loads of over 40 tons and vehicles transporting explosives or flammable liquids must get an escort across the bridge. Sometimes high winds and weather cause the bridge to close or to have limited traffic.

It truly is one of the most spectacular bridges in the United States. Not only is the Mackinac Bridge a gateway to the serene beauty of Michigan's Upper Peninsula, but it is also a necessary link on the Lake Michigan Circle Tour.