Say it Mackinaw or Mackinac? 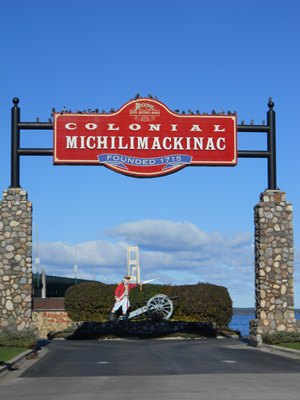 Whether it is spelled Mackinaw as in Mackinaw City or Mackinac as in Mackinac Island, they are pronounced the same way: Mack-i-naw. Why? It is because of the area's rich history with the Native Americans, French, and British.

The area was named Michilimackinac by the Native Americans and when the French built a fort here in 1715, they recorded the name with a "c" on the end as a French word with an "aw" sound would be pronounced. Many guests to the area mispronounce Mackinac by saying "Mack-i-nack." The "c" on the end of this word is instead pronounced as "aw."

The word became shortened to Mackinac. The fort was moved on the winter ice to the island across the straits which became known as Mackinac Island.

Edgar Conkling was the founder of the city in 1857 and he changed the name to Mackinaw to reflect how the word actually sounds. Thus, in this part of Michigan, there is Mackinac Island, the Mackinac Bridge, the Straits of Mackinac, Mackinaw City, and the Icebreaker Mackinaw and they are all pronounced the same way: Mack-i-naw. There is no Nack in Mackinaw or "aw"! Pronounce it Mack-i-knack and you'll give yourself away as a tourist who doesn't know how to pronounce the place that you're visiting.....

For more activities & attractions, check out these additional links for Things to Do in Northern Michigan:

Harbor Springs, Michigan -- Harbor Springs is the place to try new things! Rent a bike or a kayak, go snow tubing, attend a concert or an art fair, or play a round of golf with friends.
Petoskey -- There's so much to do in Petoskey from the Bear River Valley Recreation Area, to Petoskey State Park, to biking, golfing, hiking, and more.
Charlevoix, Michigan -- Visiting Charlevoix in Northern Michigan is a fun-filled vacation with great beaches, boating, skiing, fishing and year 'round family fun.
Things to Do in Boyne City, Michigan -- Nothing is quite like Boyne City in Northern Michigan with camping, boating, skiing, year 'round outdoor activities, and of course, the morel mushroom!
Lots of Activities in Mackinaw City, Michigan -- Explore Mackinaw City in Northern Michigan for history, the International Dark Sky Park, and outdoor activities.
Mackinac Island -- Take a step back in time and find lots of things to do when you visit Mackinac Island by horseback or bike--no cars allowed!
Northern Michigan Activities & Things to Do -- Northern Michigan offers many fun things to do for the entire family whatever the season, whatever the reason!