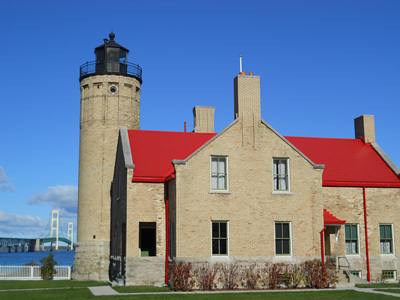 The majestic Straits of Mackinac and the Mackinac Bridge are the backdrop for the Old Mackinac Point Lighthouse, a historic lighthouse in Mackinaw City, Michigan. This Northern Michigan landmark was built in 1892 as a sentinel for the vessels entering the Straits of Mackinac from both the east and the west.

In 1890, a fog signal was placed at the spot as foggy conditions on the Straits was a navigational problem. The fog signal had its own building with twin steam boilers. The first year it was in action, 1890, it operated more than 300 hours using 10 tons of coal and 18 cords of wood. Two years later, the Mackinac Point Lighthouse was put into action with a fourth order fresnal lens.

The tower and attached keeper's quarters were constructed with cream city brick, like the McGulpin Point Lighthouse, with Indiana limestone trim. The building housing the fog signal was demolished and brick building 50' way from the lighthouse was constructed for the boilers. 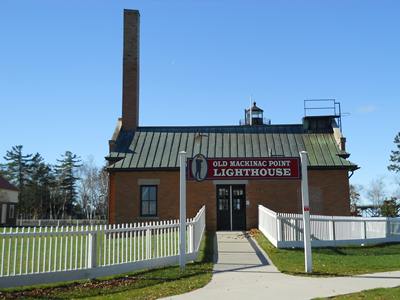 When the Mackinac Bridge opened in 1957, its twin towers became the navigational marker for the Straits of Mackinac and the Mackinac Point Lighthouse was put out of business. The property was purchased in 1960 by the Mackinac State Historic Parks and was used as a maritime museum from 1972-1988. The fog signal building reopened as a visitors center in 2000 and the restored lighthouse opened in 2004.

Visitors to adjacent Fort Michilimackinac can tour the Mackinac Point Lighthouse, with interpreters in period costume, climb the 51 steps to the lantern room and take in the spectacular view of the Straits, and climb even higher up the 13-rung ladder through the narrow open to where the fresnel lens once shown brightly.

Grand Traverse Light Station -- Located on the tip of the Leelanau Peninsula in Northern Michigan, The Grand Traverse Light was established in 1852.
Point Betsie Light Station -- Nestled in a dune just south of Sleeping Bear Dunes National Lakeshore, the tower stands 39 feet tall, but with the height of the dune it towers 52 feet above Lake Michigan.

Manitowoc North Breakwater - Walk out to the end of the pier to this Manitowoc lighthouse, and wave to the carferry S.S. Badger as the ship passes by.
Algoma North Pierhead - This lighthouse can be seen all along the Crescent Beach Boardwalk and is accessible via the pier if you want to venture closer.
Kewaunee Pierhead Lighthouse - Located in Kewaunee, Wisconsin...halfway between Sturgeon Bay and Manitowoc along Lake Michigan.